On one of our recent fake runs where we wind up eating more than we actually exercised, M and I headed into Georgetown for a change of pace.  It was early enough in the day that the sidewalks along M street were still relatively clear, unlike a weekend afternoon where you literally have to navigate through a million fashionistas to get from one store to another.  Before getting lunch at Tackle Box, I suggested we stop in Georgetown Cupcake so we could get a free cupcake.  It felt a little weird being able to get a free one in the Georgetown location, since I'd normally never be there on time to get one, haha.  The free cupcake that day was a Strawberry Lava Fudge cupcake, which I had not yet had and was excited to try. 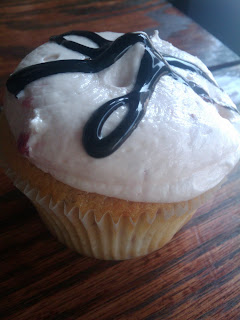 Hello, lava! (har har)
The cupcake tasted great, don't get me wrong, but I was a little disappointed in the name vs. what it actually was.  You see, Georgetown Cupcake has a Lava Fudge cupcake on their regular menu, which consists of a chocolate cupcake with a fudge core in the middle.  Yummmm.  So when I saw the free flavor as "Strawberry Lava Fudge", I expected that same gooey fudge core.  Turns out this one was their Strawberry cupcake with a fudge flower pattern drawn on top.  Not quite a "lava fudge" cupcake, if you ask me.  Regardless, of course I still ate it since I enjoy their Strawberry cupcakes- especially the frosting, woo! :o)
Posted by K at 10:00 AM