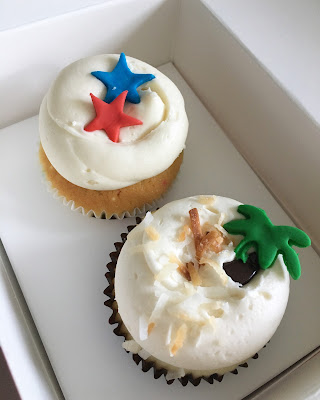 Feeling very summery with these July Georgetown Cupcake flavors! First up is the Red White and Blue Vanilla Surprise, which consists of a Vanilla cupcake infused with red, white, and blue candy nonpareils, and topped with Madagascar vanilla buttercream frosting, and red and blue fondant stars.  I love Funfetti cake, and this was a delicious variation with the red, white and blue nonpareils in the cake.

I also got the Coconut Creme Cheesecake - which I knew would not be a favorite due to the coconut flavor, haha.  But of course as a new flavor I had to try it!  This cupcake is a Coconut cheesecake with a graham cracker crumb crust, topped with a coconut buttercream frosting, toasted coconut flakes and a fondant palm tree.  So, as expected this isn't a cupcake I'd get again since I don't like coconuts, but I love the cute little palm tree, and the creamy cheesecake base doesn't have an overwhelming coconut flavor.  But not to worry if you like coconut - the combination of the coconut frosting and cheesecake together definitely make it good for any fans!
Posted by K at 10:00 AM No comments: 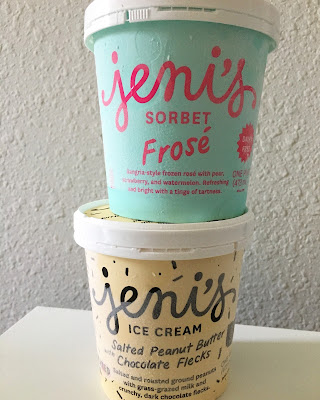 I hope everyone remembered to celebrate National Ice Cream day yesterday!  As luck would have it, my local Harris Teeter had a sale on Jeni's Ice Cream - 2 pints for $12!  I took this opportunity to get 2 of the Jeni's flavors that I have been interested in trying - the Frosé Sorbet and the Salted Peanut Butter with Chocolate Flecks.  I mean, what's better than having two different flavors to keep celebrating this important holiday, haha!
Posted by K at 10:00 AM No comments:

I've been a fan of Whistle & Flute's t-shirts and other goodies for a while now on Instagram, but during a recent online sale I couldn't resist getting a shirt for myself and also for my niece and nephew!  I mean, the ramen shirt is clearly right up my alley, and the little face on the bowl is too cute!  The kids' sushi shirts are super fun, and I love how each of the items has a tiny little face on them.  The shirts feel soft and durable, which I feel like is especially important for kids' clothes.  I heard that they will be doing another online sale on the 18th, so be sure to check out their website if you're interested in any of their products! 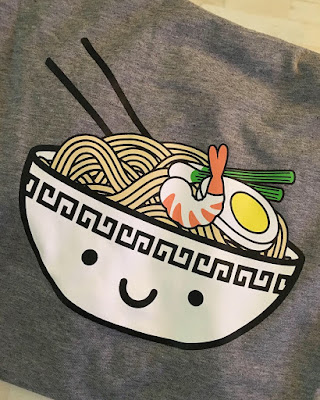 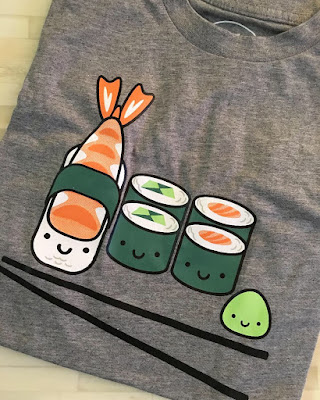 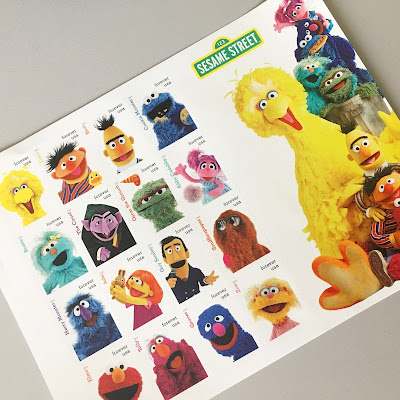 With the amount of cards that I send out, I'm always happy to see new stamp designs come out from USPS.  Especially if they're fun designs like these Sesame Street stamps!  These would be super cute to send out to family or friends with little ones that love Sesame Street.  I only wish they had come out with extra versions that have multiples of certain characters - the Cookie Monster one especially would be fun to send, haha.  Be sure to check these out if you're looking for cute new stamps!
Posted by K at 10:00 AM No comments:

A few Saturdays ago, Sunday Morning Bakehouse had a delicious special croissant for a great cause.  The Pastrami croissant has house made Russian dressing, Swiss cheese, pastrami slices, and a little pickle to top it off.  The proceeds from sales of this croissant went to the American Foundation for Suicide Prevention in honor of Anthony Bourdain, which was fitting with Bourdain day being a few days prior.

I loved the smooth dressing with the tender pastrami slices, and the big, flaky croissant to bring everything together.  Of course I always enjoy sweet pastries, but it's great to try savory versions like this to switch things up a bit - especially if they're going towards a great cause! 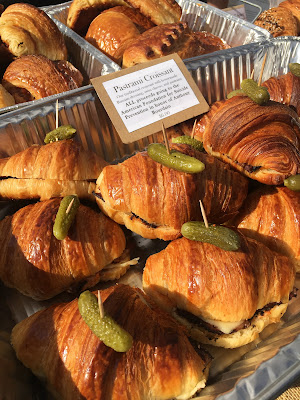 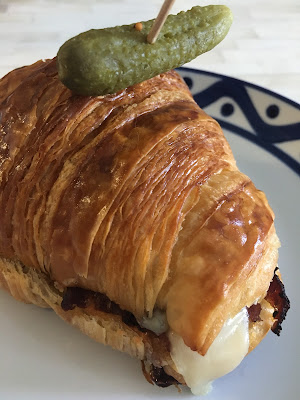