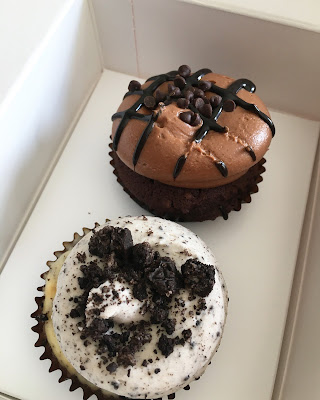 I remembered to get the Double Chocolate Chip Fudge cupcake while it's still available this month at Georgetown Cupcake - better late then never, haha :o)

The cupcake consists of a "Valrhona chocolate cupcake studded with Callebaut chocolate chips, filled with fudge, and topped with a Callebaut milk chocolate buttercream frosting, fudge lattice drizzle, and a sprinkling of Callebaut chocolate chips".  Maybe the cupcake should've been called the super duper extra chocolate cupcake instead - so many different chocolate flavors in one cupcake!  It's a really delicious combination of chocolate in all forms and textures, perfect for any chocolate lovers.  I also picked up a Cookies and Creme Cheesecake as well, which is not quite as chocolate-filled but still super tasty.  Both of these flavors are September menu items, but I hope they come back again another time!
Posted by K at 10:00 AM No comments:

I love seeing the new menu items that come out Jinya Ramen Bar throughout the year, and this current Chef's Special is no exception!  This Spicy Meatball Ramen consists of: "Chicken clear broth, meatballs, corn, green onion, cabbage, cherry tomato, butter, and original tomato sauce in the broth with chili oil". 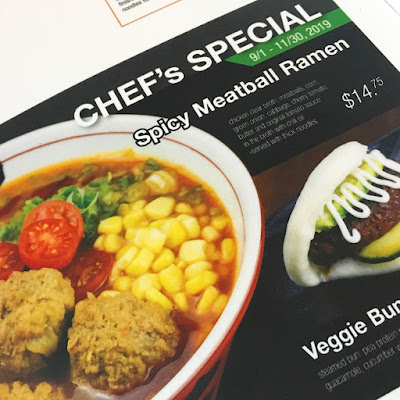 I'll be honest, it kind of sounded like a lot going on when I first saw the menu, and I especially wasn't sure about the tomato broth.  However as soon as I started eating it, I really enjoyed it!  All of the different components really added a ton of flavor and texture to the dish, and the tomato broth was much better than I expected.  The default thick noodles that come in this dish are great as well - there's a lot going on up top here and the noodles definitely stand up to the other ingredients.   It was a delicious bowl of ramen with a unique twist - I would definitely recommend trying it out while it's available:o) 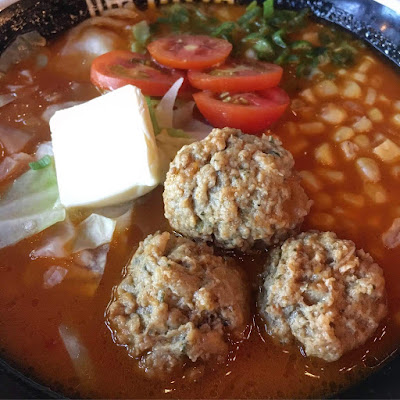 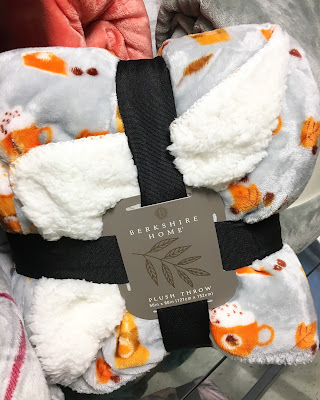 Happy first day of fall everyone!  While I've been enjoying seeing a lot of fall-themed items in stores for a few weeks now, I was still really happy to see this pumpkin spice latte-themed throw blanket at TJMaxx!

I thought it was so cute with the little mugs and pumpkin pie designs on the super soft throw.  It's a little different from the Halloween and pumpkin designs that are out in stores - perfect for anyone that's obsessed with pumpkin drinks like I am!
Posted by K at 10:00 AM No comments: 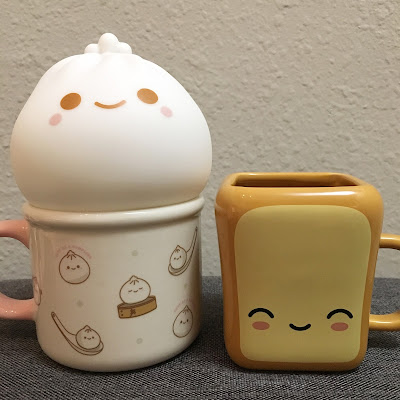 Ever since I started following Smoko on Instagram a while back, I've been obsessed with their cute and fun products!  I first got the little dumpling lamp, which gives off a gentle glow while being super cute and squishy.  I recently got two more items that I had ordered a while ago - a dumpling mug and toast mug!  The dumpling mug has the same dumpling character in various drawings, which remind me of the delicious soup dumplings at Din Tai Fung :o) The toast mug is slightly smaller and square, like a thick piece of toast (with a face on it, haha) If you're also a fan of food/cute themed items (or know someone that would love them as a gift), be sure to check out all of the fun items that Smoko offers!
Posted by K at 10:00 AM No comments:

I was very happy to see some pumpkin items trickling in to my local Trader Joe's the other day!  While I don't think it's full on pumpkin mode all over the store just yet, there's already a good amount of fun new products to check out!  I'll definitely have to increase my visits over the next few weeks to make sure I don't miss anything, haha :o) 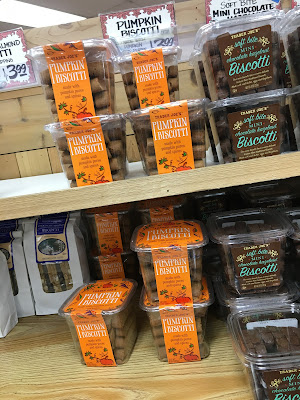 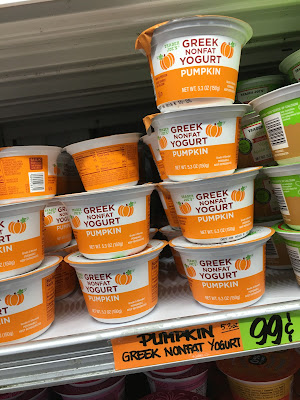 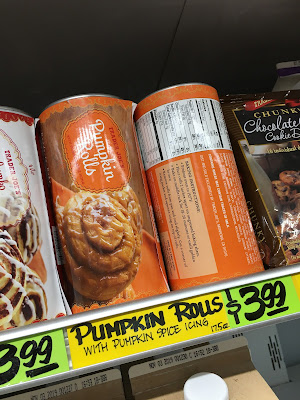 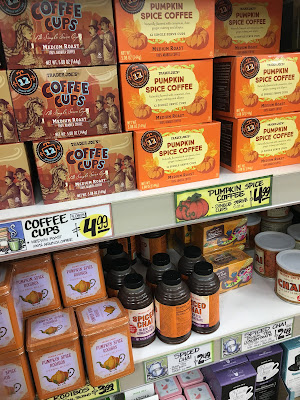 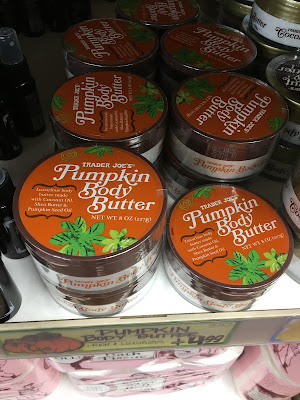 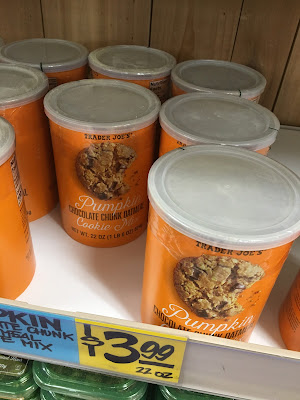 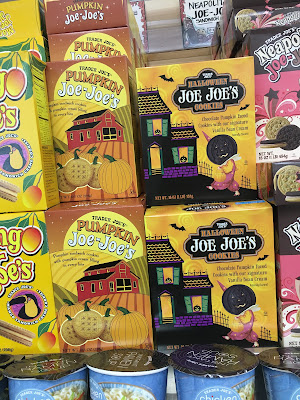 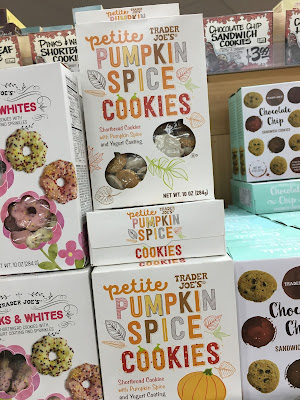 I know that I've already been celebrating everything fall and pumpkins, but how cute is this summer themed Hello Kitty collection at World Market?  I had to take a closer look around the display when I saw this Omatsuri (Japanese festival) theme - so many cute items! 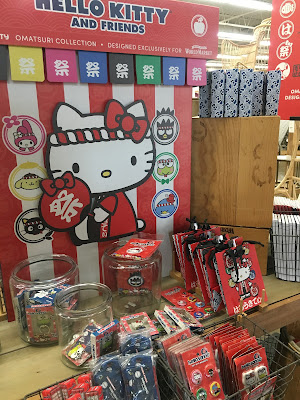 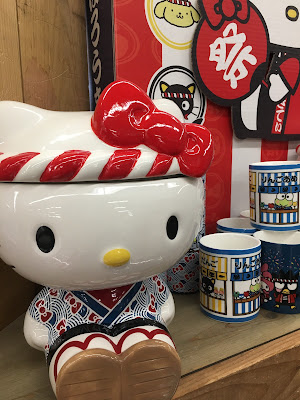 I really like that there are so many different items, like mugs, enamel pins, bento boxes, notepads just to name a few.  I would love to know who is buying this enormous Hello Kitty cookie jar, where part of the head pops off to fill with cookies, haha!
Posted by K at 10:00 AM No comments: 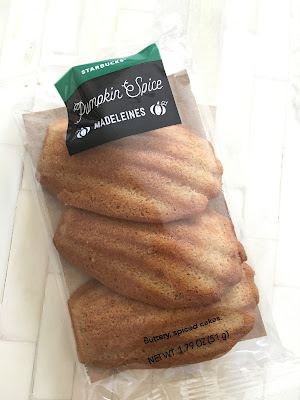 While it's still technically summer, September to me always feels like the start of fall because of all the fun fall goodies that start to come out.  I saw these Pumpkin Spice Madeleines at Starbucks and had to try them out.

Even though I didn't get an overwhelming pumpkin spice taste from these, just a nice hint of spice in each bite.  If you like trying pumpkin items I would definitely recommend giving these a try while they're available.  The little cakes are the perfect snack with coffee or tea!
Posted by K at 10:00 AM No comments: