I hope everyone had a great weekend!  My friends C, L and I went on a quick road trip to Waterford, VA to stay at this really pretty restored farmhouse for one night, which was very fun experience for us!

There's clearly a lot of work that went into the house and the property , with so many little details that were neat to check out during our stay.  We even became good friends with the goats and chickens that live on the property - I don't think I'll ever get a chance to be so close to these animals in such a relaxed environment, haha.  This was a great chance to spend some time away from our homes enjoying something totally unique for all three of us! 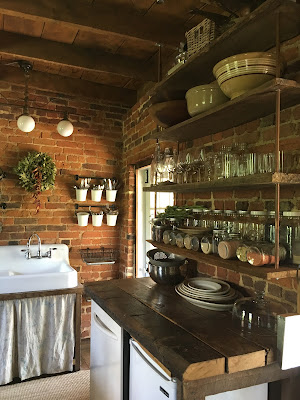 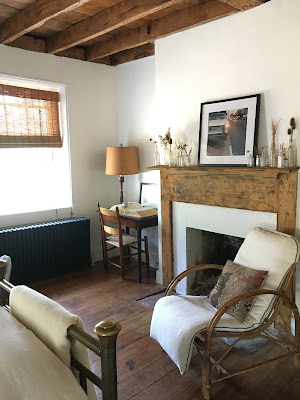 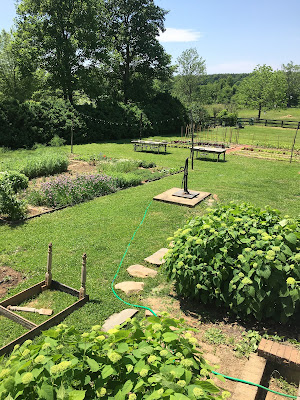 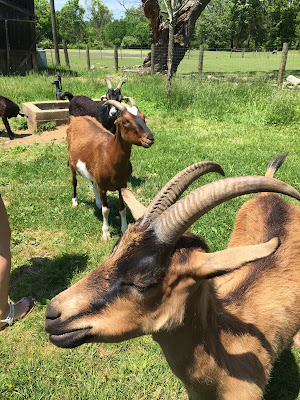 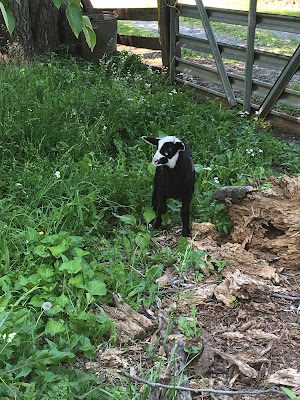 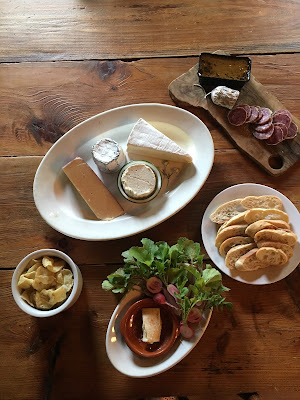 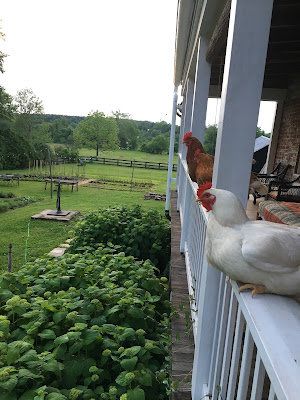 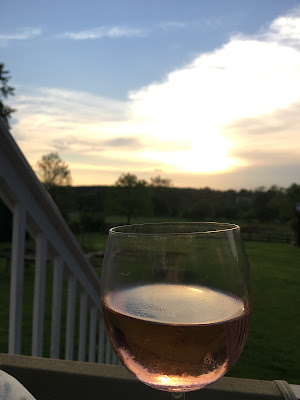 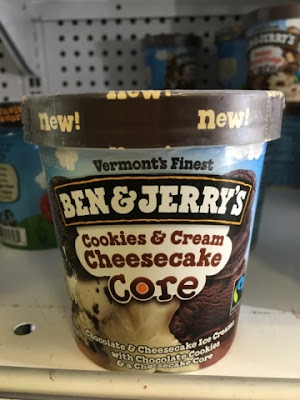 I meant to write about this Ben & Jerry's Core flavor earlier, but didn't think much of it until I recently saw this on clearance at Target.  Since it was one of the few flavors on clearance, I wonder if it's going to be phased out?

This pint consists of chocolate and cheesecake ice creams with chocolate cookies and a cheesecake core.  It's a great combination of rich chocolate flavor with the creamy cheesecake to balance things out.  I honestly didn't get too much of the standard "cookies and cream" aka Oreo flavor because this actually had a lot of cheesecake flavor, not the usual cookie pieces in vanilla ice cream.  Which isn't to say it's not good because it's still delicious, haha.  If this flavor does stick around, be sure to keep an eye out for it if you're interested in trying it out!
Posted by K at 10:00 AM No comments: 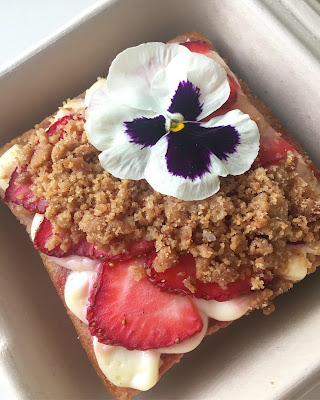 What a beautiful strawberry toast!  As soon as I saw this on Sunday Morning Bakehouse's Instagram account during Mother's Day weekend, I knew I had to go get one.  I also was very curious about the "toast" being made out of Croissant dough instead of a regular bread.

The strawberry toast consisted of Croissant bread, homemade jam, vanilla cream cheese mousse, fresh strawberries, buttery crumble, and an edible flower.  These were so pretty to look at even before taking a single bite. 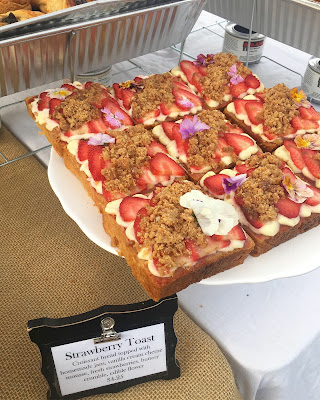 The thick Croissant toast held all of the toppings perfectly without getting too soggy, and I loved the thick vanilla cream cheese mousse as the creamy base for the other ingredients.  This was definitely a fork and knife type of pastry, and all of the components were really tasty.  I hope this (or another version with different components) comes back to the market soon!
Posted by K at 10:00 AM No comments: 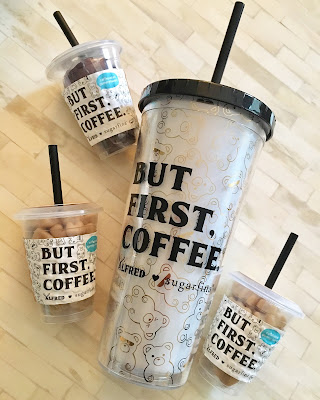 How cute are these coffee-themed Sugarfina x Alfred collaboration goodies?? I pre-ordered these as soon as the collection was announced, because I can't resist something this cute and coffee themed!

There's a few different items to choose from in the collection, but I went with the coffee tumbler (which comes with a bag of cold brew and vanilla latte gummy bears), and the mini cups of vanilla latte and cold brew gummy bears.  These aren't just coffee-themed in the design, but actually have caffeine in them as well!  One of the mini cups of the cold brew gummy bears has the same amount of caffeine as 1 espresso shot.  For any fellow coffee lovers, these are a great way to enjoy the taste of coffee in cute gummy form!
Posted by K at 10:00 AM No comments:

For any local friends that are looking for a fun shopping event this weekend - Congressional Plaza has a sidewalk sale! I go to this shopping center pretty often and have been to this sidewalk sale before - there's a lot of good deals to check out.

Details about the event:


The annual Congressional Plaza Spring Sidewalk Sale is Friday, May 17 – Sunday, May 19. Merchants will display featured goods both inside and outside their stores. 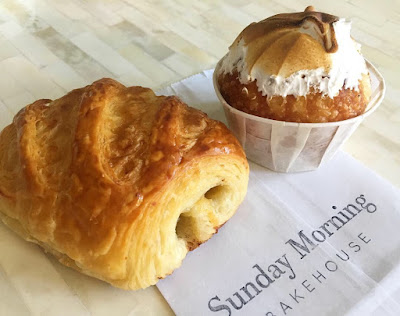 The Pike Central Farm Market started back up at the end of April, and I couldn't wait to get my hands on the Sunday Morning Bakehouse treats again!  Apparently I was far from the only person to think this, as there was a long line of other customers eagerly awaiting baked goods only 15 minutes after the market had opened.

I got the sausage and cheddar croissant, and also picked up a new lemon meringue doughnut - a great combination of sweet and savory for my weekend mornings!  I don't normally choose lemon meringue desserts, but I love their regular brioche doughnuts and this one was a really good variation with lemon filling and meringue topping.  The sausage and cheddar croissant was flaky on the outside and cheesy and delicious on the inside - it's quickly becoming a favorite savory option for me.  If you're in the area on Saturday mornings, be sure to get in line early before they sell out! 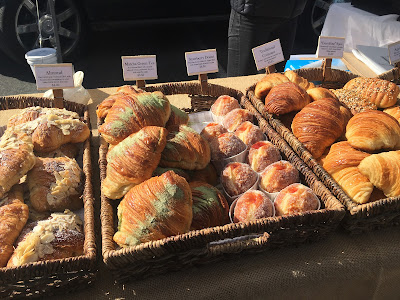 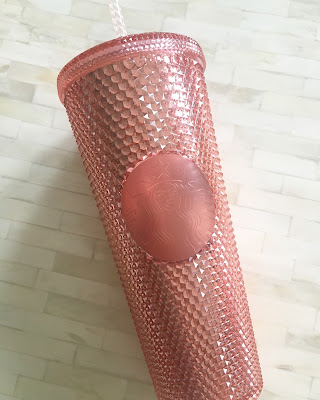 It probably doesn't seem that way, but I try to not buy too many Starbucks mugs and tumblers.  However, sometimes I just can't resist and have to get one, especially if it's one I think will sell out quickly.  I saw this new rose gold 24 oz. cold tumbler and love the iridescent color and textured design!  The outside of the lid and tumbler is actually bumpy, which adds to the pretty reflection and color when it hits the light.  Also, maybe it'll help some people from letting the tumbler slip out of their hands, haha.

I don't know if this will fit in my car's cup holder, but it'll be the perfect water cup at the office or out on the weekend.  It's very tall so it should last you a while in between refills, haha.  If you also like fun pretty designs like this, be sure to pick one up at Starbucks or Target Starbucks stores.  I initially saw this at my nearby Starbucks, but they had sold out a few days later.  I went to Target instead and saw two of these on the shelf, which I was very happy about!
Posted by K at 10:00 AM No comments: 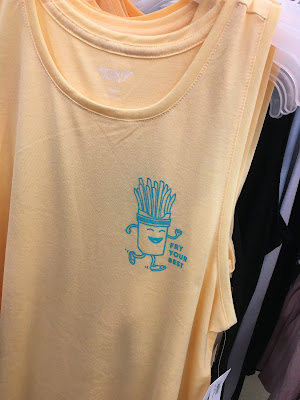 I recently went to Old Navy to pick up some new workout clothes, and could not resist getting this cute French Fry gym tank! I am definitely a sucker for food themes and cute mascots, especially for something that's not really fun like the gym, haha.  Old Navy often offers sales on their workout clothes, as well as Super Cash deals to use on later purchases, so be sure to regularly check their website or stores for more cute new designs!
Posted by K at 10:00 AM 1 comment: