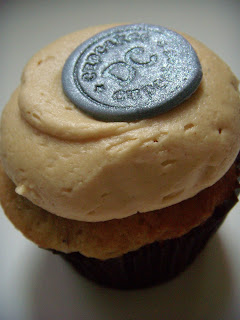 As many times as I am able to go to Georgetown Cupcake, there are a few elusive "secret" flavors that I never seem to be able to snag.  This Peanut Butter Banana cupcake is - or should I say, was - one such flavor.
Finally, finally, FINALLY, I was able to get to the Bethesda location early in the day and pick up this cupcake.  The most dominant smell is definitely the peanut butter frosting.  This frosting was AWESOMEEEEEEEEEEEEEEEEEEEEEEEEEEEEEEEE.  Provided that you're a fan of peanut butter, this could be one of the best peanut butter frostings ever.  It was so light and fluffy, super peanut butter-y, deeeeeeelicious.  Which isn't to say the banana cake wasn't good too, but, man......... that frosting!!
My only criticism... throw some bacon on top, call it an Elvis cupcake! Haha.
Posted by K at 10:00 AM