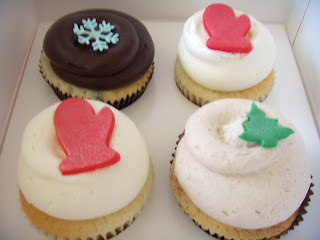 Isn't this such a festive box of cupcakes???

I brought this box over to T and G's house a few weekends ago (when we went to Hershey Park) from Georgetown Cupcake - I LOVE their holiday cupcakes!

On the top left we have Santa's Chocolate Chip (Vanilla chocolate chip cupcake with a whipped Callebaut chocolate frosting topped with a fondant snowflake).

On the bottom right we have Cinnamon Spice (Cinnamon cupcake topped with a cinnamon buttercream frosting and a green fondant Christmas tree).

And the other two are the Red Mitten Vanilla cupcakes (Classic Madagascar bourbon vanilla cupcake topped with a vanilla cream cheese frosting and a red fondant mitten).

As you might guess, the cupcakes are the same as the regular menu Chocolate Chip, Cinnamon Spice, and Vanilla Squared cupcakes, but just jazzed up for the holidays :o)  Super cute!