Another Georgetown Cupcake flavor review, woo!  I pretty much assumed that I would love this flavor, but obviously I had to try it out to be sure :o) 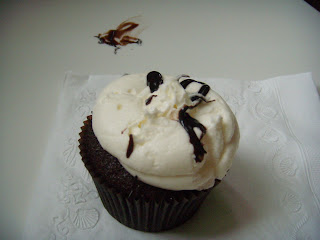 As you can see, I was so excited to get the photo done with so I could eat it- so much so that I flipped it over right as I was setting it down to photograph it.  So if you want to imagine a swirly fudge flower-ish pattern on the top of the cupcake... 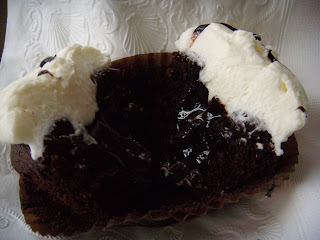 True to its name, this cupcake was oozy lava-y goodness.  The cake and the fudge core were rich and delicious, perfect for a choco-holic like myself.  The vanilla frosting helped to balance out the flavors and added a nice color contrast. If they had the fudge core on every cupcake they offered, I would be one happy girl!

The Lava Fudge Cupcake is currently being offered on Tuesdays and Fridays - I would absolutely recommend trying it out if you love chocolate!