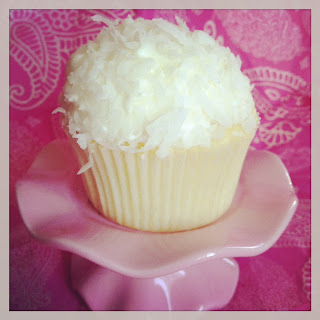 Back in December I bought this Snowball cupcake from Georgetown Cupcake during the holidays so that it could be "officially" recorded on here, haha.  When they first started offering the Snowball cupcake a few years ago, it was a coconut cupcake with a vanilla frosting core.  The current official description is "Georgetown Cupcake's holiday inspired coconut cupcake topped with vanilla cream cheese frosting and coconut flakes".

So, this Snowball cupcake above is the same as the regular Coconut cupcake, unfortunately.  Even though I don't like coconut, I do wish that they could go back to adding a little something extra to the holiday version, just to make it more special.  If you are a fan of the Coconut cupcake though, this one is offered every day in December (as opposed to specific days the rest of the year) which is a nice bonus.
Posted by K at 10:00 AM