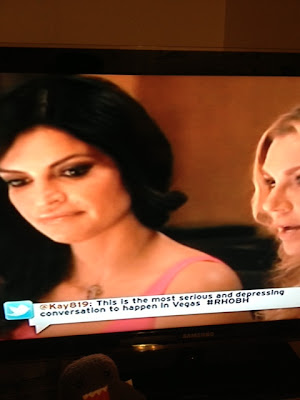 It was a lovely surprise to see my Tweet appear on Bravo for the second time, woohoo! Bravo often shows "social editions" of most of their shows, in which a rerun of an episode includes Tweets and Facebook comments that viewers had posted during the original airing.

Seriously though, these Beverly Hills ladies were in Vegas, at an awesome dinner, and having the most depressing conversation EVERRRRRR.  I'm glad the folks at Bravo deemed it important enough to share, haha.