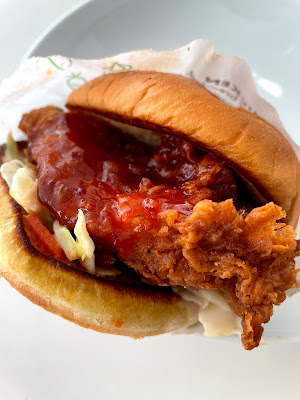 As soon as I saw that Shake Shack was bringing some of their South Korean Shack's Korean-inspired menu items to the US for a limited time I knew I had to go check it out!  I got the Korean-Style Fried Chick'n sandwich, which consists of "Gochujang- glazed crispy chicken breast over our white kimchi slaw featuring Choi's Kimchi Co. on our classic Martin's potato roll".
I already love the crispy chick'n sandwich at Shake Shack so I knew that this one would be great, to be honest. Adding a sweet spicy glaze with the Gochujang and a kimchi-based slaw sounded even better! My only complaint is that I wish there was more kimchi slaw included because I think it would've added even more texture.  If you're interested in trying the Korean-style menu be sure to check them out soon as they're only available for a limited time.
Posted by K at 10:00 AM No comments: