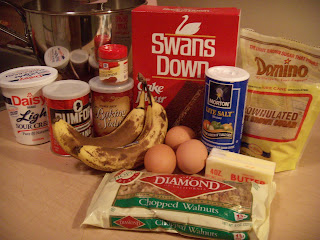 I've really enjoyed baking my way through the Martha Stewart's Cupcakes cookbook, especially when it's done out of necessity, as the case was here.  As you can see above, my 2 remaining bananas were just past the "I'd like to eat this for breakfast" stage, so I took a look in the cookbook for a banana recipe.  The original recipe is for Banana-Pecan cupcakes with caramel frosting, but I decided to make them without the frosting, for more of a breakfast muffin-type item.  I also swapped in walnuts for the pecans, and sour cream for buttermilk, because that's what I already had in my apartment.  I checked online and sour cream seems to be an acceptable substitute for buttermilk, which I will be employing in the future.  I can't imagine most people keep jugs of buttermilk on hand (except maybe Paula Deen, ya'll), so it was nice to know that I could sub something in for that. 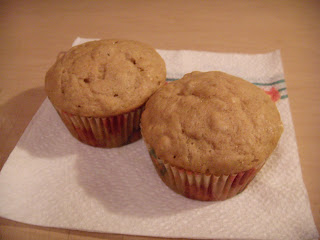 Once again, Martha did not disappoint.  These muffins smell fantastic, and they are moist and delicious.  They weren't overly sweet which makes them a good brunch/breakfast option.  If you're a fan of banana bread, you will love these cupcakes!  It's a great recipe to keep around in general, but especially if you tend to neglect bananas for days at a time but don't want to waste them and throw them out, haha.