When my lovely friend E was visiting from NYC, we were fortunate to get two days of unique Georgetown Cupcake free flavors- the first being the Lemon Coconut, and the second being the Banana Split Cupcake.  When I saw the Facebook post announcing the Banana Split cupcake, it immediately stumped me.  Sure, a banana flavor in there is expected, as is some sort of fudge component, but I really wasn't sure what it was going to consist of. 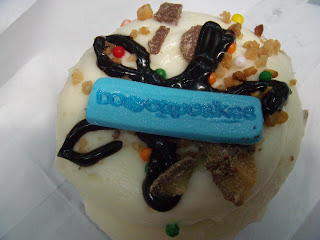 Apparently, it means EVERYTHING, even possibly the kitchen sink, haha.
From what I could see, this consisted of: banana cake, vanilla frosting, fudge flower, toffee candy crumbles, round rainbow sprinkles, candied nuts, and a fondant "DC cupcakes" logo precariously placed on top of allllllllllll that.  Holy rediculousness, Batman!  Did the staff have "bring your child to work day" in order to make this cupcake? 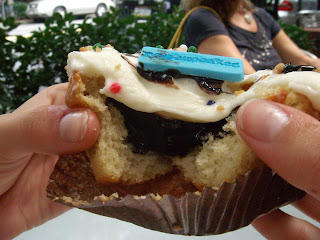 (*in infomercial voice*) Oh wait, but that's not all!  There was also an ooey gooey fudge core in the middle of the cupcake (as illustrated by E and her cupcake splitting skills, haha).
Now, from all that I just said above, it might seem like I hated the cupcake.  I didn't, I thought it was super yummy, but just really overwhelming, especially compared to Georgetown Cupcake's other (simpler) flavors, haha.  I mean I get that a Banana Split/sundae in real life has a bunch of components, and that's why this cupcake came out this way, but it was just so out of left field to me, haha.  I'm happy that they had a totally new and original flavor as a free one though, definitely fun to try out!
Posted by K at 10:00 AM