One of my greatest wins yet- a free box of Georgetown Cupcakes shipped to my apartment, courtesy of TLC via Twitter!  I was v. excited, not only for the cupcakes, but also to see firsthand how they ship cupcakes, since clearly I'd wouldn't ever have to get a box shipped myself (I can be lazy, but not THAT lazy).  Thank you TLC for having a great trivia contest!
So, in case you were also curious, here's the breakdown of how a dozen cupcakes from Georgetown Cupcake gets shipped to people nationwide: 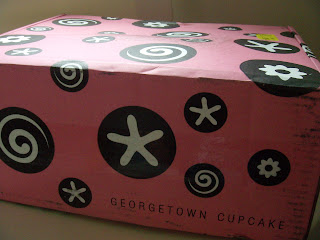 Cute pink shipping box with the "cupcake" patterns throughout. 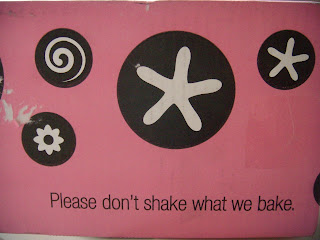 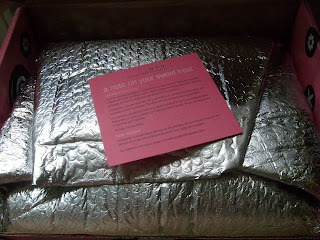 A note on how best to enjoy the cupcakes/allergy information.  Basically- stay away if you're allergic to nuts.  Also, the whole inside box is wrapped in silver bubble wrap. 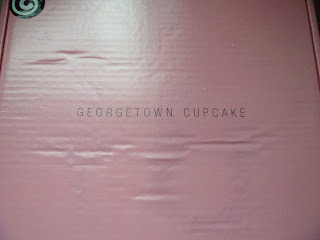 The inside box.  A little damp, from the ice packs that were surrounding it. 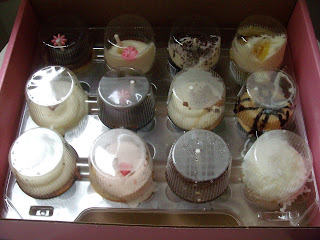 Inside box (opened): Clamshell container with individual placeholders for each cupcake. 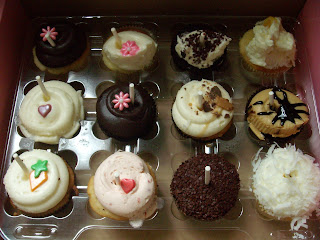 And finally, the cupcakes!
Top Row: Vanilla & Chocolate, Vanilla Squared, Chocolate & Vanilla, Lemon Blossom.
Middle Row: Red Velvet, Chocolate Squared, Toffee Crunch, PB Fudge (or Chocolate PB Chip, since they both look the same on the outside, and someone else ate it so I don't know, haha).
Bottom Row: Carrot, Strawberry, Chocolate Cubed, Coconut
Initial impressions: I like that each cupcake is in its individual "holder" especially so that different frostings don't smash together.  I also like the use of what appears to be lollipop sticks stuck in the middle of each cupcake, for further stabilizing during transport.  What didn't turn out so great are the cupcakes in the top row, haha.  As you can see most of their respective frostings smashed into the sides of the clamshell container at some point in its travels.  If these weren't free and I was buying them for a party, I would've been upset since they did look pretty friggin ugly, haha.  However, these were free and clearly there's no change to the taste of the cupcakes, so no complaints from me!  Just might be something to keep in mind in case anyone reading this wanted to ship a ton to a wedding or a special party of some sort.
Posted by K at 10:00 AM