After ordering the pork cupcake (it's best to order it when you sit down because it takes a little longer), we also got The Other KFC - Bourbon Steak's version of Korean fried chicken (below). 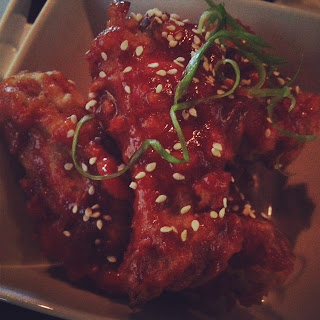 These were crispy with a pretty sweet and interesting sauce coating each wing.  They were good, don't get me wrong, but to me it just can't compare to Bon Chon, haha. 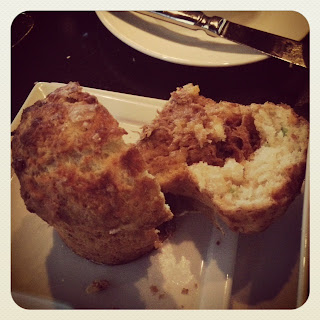 But....... the pork cupcake. OMG.  This was soooooooooooooo good.  The pork was delicious, but the cheddar scallion biscuit/cupcake portion was outstanding.  If a basket of just the biscuits was available I would totally order them in a second.  The idea of a "pork cupcake" might throw off some people, but I would definitely recommend trying this out, it was so fantastic!