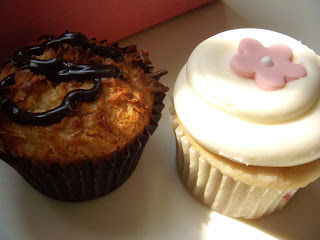 Georgetown Cupcake has a few more special flavors in April, due to multiple Passover cupcakes (Coconut macaroons with chocolate/caramel drizzle), Easter cupcakes with various theme fondant toppings, plus the two monthly specials (Cherry Blossom, White Chocolate Raspberry).  I picked up the Chocolate-drizzle Passover cupcake so I could try it before Passover ended, and decided to pick up a Cherry Blossom one as well, since I had just gone out to see the real cherry blossoms earlier that day.
As I mentioned above, the Passover "cupcake" is really a coconut macaroon shaped like a cupcake.  It's a really cute presentation, and nicely toasted on top.  The toasted part actually reminded me of breakfast hash browns, haha.  Basically it tastes like a ball of shredded coconut, at least to me.  It's got a thick, chewy consistency- if you like coconut desserts or coconut in general, it's a cute little dessert or snack :o)
The Cherry Blossom cupcake is totally adorable and perfect for spring.  You can't really tell in my photo, but there are little chunks of cherry in the cake itself, which made for a really pretty presentation as well.  It isn't overwhelmingly cherry-flavored, which I liked.
Just as an aside, I was not expecting to like these flavors due to coconut and cherry both being pretty low on my "flavor preferences" list, haha.  I would not get the Passover cupcake again, but I would get the Cherry Blossom one again, it still had a light, fresh flavor that I liked.  I'm assuming that since Passover's over they won't be carrying the cupcake anymore, but Cherry Blossom is available through April.
Posted by K at 10:00 AM