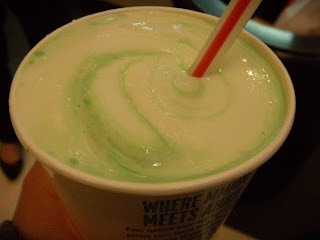 This post got lost in the shuffle of uploading photos, unfortunately, but I felt it was worth posting.  Fact: I've never had a McDonald's Shamrock Shake before.  Not that it was on my Bucket List or anything, but I figured I'd give it a try eventually.  T was on board to try it out also, as she hadn't ever had it either.  Funny how Twitter really can bring people together in the randomest ways, haha.
This stuff started out pretty scary-looking.  I mean just look at that photo!  It basically seemed like their regular vanilla milkshake with this radioactive-looking green goo swirled in haphazardly....errrr.  But after a thorough mix, it turned into a lightly minty shake with a less scary looking green hue to it.
Overall, I don't really get the hype- maybe people love it mainly because it's NOT available year-round?  Or really really really love McD's no matter what?  But it wasn't as bad as I imagined, I will say, especially after mixing the green goo thoroughly into the shake.  Either way, yay to T and myself for no longer being Sham-Shake virgins, ha!
Posted by K at 10:00 AM