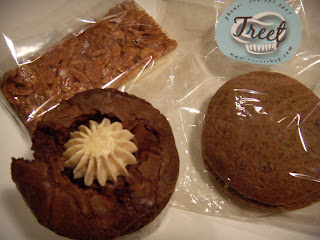 Another tasty set of goodies from the Treets Bakery!  I picked these up at the Bethesda Farmers' Market in early March: Peanut Butter Cup Brownie; Nut Bar (shortbread bottom); and another Peanut Butter-filled Whoopie Pie :o) All were delicious, but the PB Brownie was my favorite of this bunch- there was a mini Reese's PB cup inside the brownie, making it extra rich and peanut buttery.
I heard that in addition to their online shop and Bethesda Farmers' Market stand, Treets mini-cupcakes are now available at the Cereal Bowl in Cleveland Park, and should be available at the Clarendon farmers' markets this summer as well, yay!
Posted by K at 10:00 AM