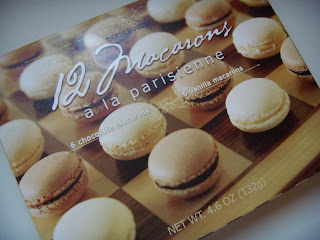 I first heard about the elusive Trader Joe's Macarons in a Serious Eats and totally wanted to try them as soon as I could get my hands on them.  Which, as it turns out, was harder than I expected.  I couldn't find them at either of the two Trader Joe's by me, and had pretty much given up after a few sporadic visits.
Just as I had pretty much given up on them, I stopped into a Trader Joe's in NJ with my mom one weekend- and there they were!!!  I quickly snagged a box, and brought it back in a cooler with me to Maryland at the end of the weekend.  The box recommends taking out however many you want and thawing them at room temperature before eating.  However, I (along with my friend A) have found that the Vanilla macarons taste really good frozen/not thawed out, sort of like a custard-y sweet ice cream-ish treat.  I personally like the Vanilla macaron more, because it's a v. specific Vanilla taste that is similar to a vanilla custard they use in Japanese ice cream, snacks, and pastries.  Loves it! 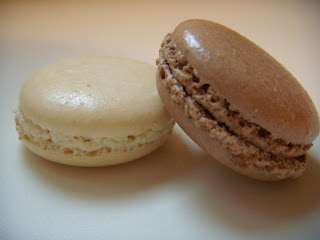 Both flavors are good though, surprisingly so for being a frozen macaron, haha.  I'm no way near a macaron expert- I've only had them a few times, including Bouchon Bakery in NYC, but I don't really know enough about different brands/types at all.  Just saying that these (if you can find them) are a great snack/dessert item to keep around for a quick sweets fix, and/or bring to a dinner party to share.  I just hope they eventually start carrying them at the Trader Joe's stores that are actually close to me!
Posted by K at 10:00 AM